All over the world, the distances over which power sources have to travel are increasing, requiring longer cables in both marine and ground applications. Testing the safety of the cables that cover these lengths is putting real strain on existing test facilities. Fortunately, XXL reactors from HIGHVOLT are coming to the rescue.

The twelve steel giants make for a jaw-dropping sight. Linked to one another by a network of thin rods and delicate stilts, they stretch feeler-like appendages boldly out in front of them. Spanning some 400 square kilometers, the structure looks like something dreamt up by a futuristic imagination – but those with an expert eye will instantly recognize it as a test system for cables. The steel giants are the reactors.

The rods and stilts are the voltage dividers. And the things that look like feelers? Those are bushings. They all come together to form what is probably the world’s most powerful high-voltage test system. Oper­ating with 700 megavolt-amperes, it is able to test the entirety of a 55-kilometer cable system for defects in the insulation and coupling sleeves at 318 kilovolts. Before it came on the scene, cable systems of this length had to be tested in individual sections.

At 4.5 meters wide, 3.5 meters high, 4 meters long, and weighing some 50 tons (in the Picture on the right), they are approximately twice the size of their smaller counterparts.(© Erik Hauffe)

The location for this technological masterpiece is the plant of a submarine cable manufacturer on the Isth­mus of Corinth in Greece. Just a short walk from the quayside there, coils of submarine cables are tested on enormous turntables before being loaded on to special ships bound for projects undertaken by customers all over the world. HIGHVOLT, a member of the Reinhausen Group, was responsible for constructing the facility. The Dresden-based company specializes in test systems designed for high-voltage and extra-high-voltage applications—making it a business whose bread and butter are extreme conditions.

But even this facility proved a challenge for HIGHVOLT’s engineers. Günther Siebert, head of the transformer team, explains: “The longer a cable or a cable system is, the higher the power delivered by the test system has to be. For a length of 55 kilometers, we would have had to install practically an average-sized power plant next to the equipment in order to achieve the level of test power needed. So we knew we had to find a different solution.”

A NEW ERA IN ENERGY

The Greek cable manufacturer in this application is not the only one to have faced this challenge. All over the world, but especially in Europe, the distances that power is being required to cover are growing, which means that more and more AC and DC voltage cables are being installed under the sea or buried below ground level. This is happening in response to our planet becoming an increasingly electrified place. A study by the World Energy Council has found that the demand for power in 2060 could actually be twice as high as it is today. Renewable sources of energy are therefore becoming an increasingly important way of feeding this appetite for energy while looking out for environmental concerns.

One example demonstrating this is the European Union’s goal of boosting the proportion of energy drawn from environmentally conscious resources to at least 32 percent by 2030. Achieving this will require significant network expansion, however, as most energy sources are located far away from conurbations—take the offshore wind farms in the Baltic Sea, for example, or Norway’s hydroelectric power plants, or the solar farms that are currently being planned for installation in the Sahara. To accommodate this, numerous electricity lines that cross seas and connect networks are either on the agenda or are already being built.

Cabling Around the World The history of submarine cabling had something of a shaky start. The very first cable laid under the sea was only able to transmit a single telegram, and on 29 August 1850 – just one day after the connection between France and the United Kingdom had been established – the net of a fishing boat managed to sever the line.

This soon prompted additional trials of the technology, leading to successful advancements in the cabling used in the world’s oceans (then primarily intended for communication).

Around 100 years later, in 1954, the first high-voltage direct-current (HVDC) transmission cable was installed under the sea between the Swedish island of Gotland and the country’s mainland.

Measuring 90 kilometers in length, it boasted a transmission voltage of 100 kilovolts and a capacity of 20 megawatts. Since then, the transmission voltage of submarine cables has continued to grow and now reaches some 525 kilovolts of DC voltage and 500 kilovolts of AC voltage. A total of 8,000 kilometers have been installed under seas and oceans worldwide over the same period – 70 percent of them in Europe. This is also where the majority of new projects are currently being planned.

It is only within the past few years, however, that the considerable advances made in cable technology have made these projects viable at all. Since they began, AC and DC transmission voltages measuring up to 500 kilo­volts and 525 kilovolts respectively have become attainable, and new materials plus new types of production technology now enable manufacturers to construct lengths of up to 15 kilometers.

This increase means that fewer sleeves are required to connect the individual sections of cable — a real bonus considering that around 50 percent of failures are attributable to incorrectly installed or defective sleeves, making every one of them a potential source of weakness. If a sleeve were to break and cause the entire network to collapse suddenly, the consequences could be dire.

This is precisely the situation that the Greek manufacturer is seek­ing to avoid. For this reason, it has to test its cables for any potential defects before sending them off on their journeys. Its previous system was no longer up to the job, and this was where HIGHVOLT stepped in with an upgrade. As Günther Siebert explains, the new system works in much the same way as the old one did: “Power frequency withstand voltage testing, based on the resonance principle and combined with partial discharge meas­urement, has proven itself to be an appropriate method of testing both AC and DC cables.” 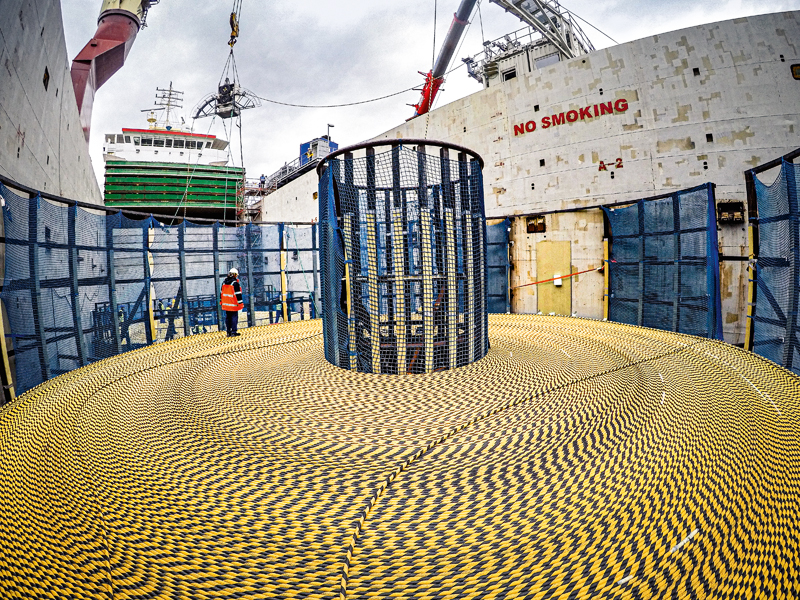 Today’s pipe-laying vessels are able to transport cables measuring up to 80 kilometers. (© Shutterstock)

When HIGHVOLT knew that it had to make sure this same method would work for longer cables too, it turned to larger reactors for the solution. It is immediately obvious from the Greek facility’s appearance just how large they actually are: At 4.5 meters wide, 3.5 meters high, 4 meters long, and weighing some 50 tons, they are approximately twice the size of their smaller counterparts. “At this size, our XXL reactors can still be transported by land—although only just—and it takes hardly any time at all for them to get up and running,” says Siebert.

In a resonance test circuit, reactors serve as the opposite number to the capacitive test object, which in this application is the cable. Put simply, the longer the cable, the higher the required capacity—and the high­er the reactor power needed as a result. While several XXL reactors could be combined using series or parallel connections in order to boost the power, this would not have made much sense with the previous type. “The XXL reactors are only twice as heavy as the old ones, but they are four times as powerful,” says Siebert.

While one of the old reactors was able to deliver 30 MVA of power, the new ones achieve some 115 MVA—so just four reactors are now enough to meet the Greek cable manufacturer’s requirements, in contrast to the 16 smaller ones that it would have need­-
ed previously. What’s more, the four larger reactors have the advantage of requiring only 120 square meters of space as opposed to the 620 square meters that would have been taken up by the 16 smaller ones.

“The new XXL reactors are four times more powerful than the previous ones, but only twice the size.”Günther Siebert, head of the transformer team at HIGHVOLT

As an added bonus that has given the test power even more of a boost, the XXL reactors have been dimensioned for a frequency range of 10 to 300 hertz—previously, this range had started at 20 hertz. “The lower the test frequency, the lower the test current that needs to flow into the cable. This means that it is possible to test longer stretches of cable without the need for any changes in the test voltage,” explains Siebert.

But that’s just the start. The potential that these XXL reactors hold is far from exhausted thanks to a modular facility structure that will allow expansions to be made in the future. “We can combine as many as 16 reactors in a single test system, which in theory means that it could be possible to test cables meas­uring as much as 200 kilometers in length,” says Siebert—the only obstacle being that there are, as yet, no ships large enough to carry a cable of this size in one piece. For the moment, one thing is certain: With demand for electricity growing all the time, these cable projects still have a lot of mileage left in them. 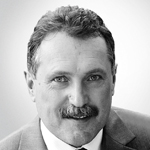 Do you have any questions about the new test system?
Günther Siebert is here to help:
Siebert@highvolt.de