China is developing the longest high-voltage direct-current transmission line in the world. Everything about this project is gigantic – including the 28 transformers designed by Siemens for the converter station. No one has ever built anything so powerful before. And Reinhausen expertise is playing a key role in the project.

China’s economy is growing rapidly, as is the resultant demand for more and more electricity to sustain its glistening megacities. To help the metropolises become cleaner, even more energy is set to be generated from renewable resources in the future. But the favorable conditions needed to generate this energy are found far away from the urban areas in the east. Instead, they are found in the sparsely populated western part of the country, such as in the province of Xinjiang, where it is very windy and there are many hours of sunshine, as well as numerous rivers to generate hydropower. The challenge is to transport this energy over a large distance to where it is needed, while keeping losses to a minimum.

The solution to this challenge is high-voltage direct-current (HVDC) transmission. To enable electricity to be transported over large distances with the lowest possible losses, the power must be transmitted with a low current and high transmission voltage. For long transmission paths, this is most economical with direct current. Therefore, at the beginning of the HVDC transmission line, the alternating current is transformed into direct current in a converter station and then transformed back to alternating current at the end of the line. There are already numerous HVDC lines in operation around the world, but the new line that connects the city of Changji in the Xinjiang province with Guquan in the Anhui province surpasses all previous records. At 3,284 kilometers long, it will have a transmission capacity of twelve gigawatts when it is connected to the grid, which is expected to take place at the end of 2018. This roughly corresponds to the power of twelve conventional large power stations. 1,100 kilovolts of direct-current voltage is required for this transmission. By way of comparison, the highest transmission capacity to date is eight gigawatts over a distance of
2,210 kilometers with a transmission voltage of 800 kilovolts.

The Chinese energy company “State Grid Corporation of China” commissioned Siemens to design 28 transformers for the converter station at the end of the new line in Guquan. The transformers, which were manufactured at two Siemens sites and two partner plants in China, have set a new record as well: Each of the seven 1,100 kilovolt DC single-phase transformers is 37.5 meters long, 14.5 meters high, twelve meters wide, and weighs 909 metric tons when in operation. With a transmission capacity of 587.1 megavolt-amperes each, they are the most powerful HVDC transformers in the world. This level of power places enormous demands on the transformers and on the reliability of the technology. 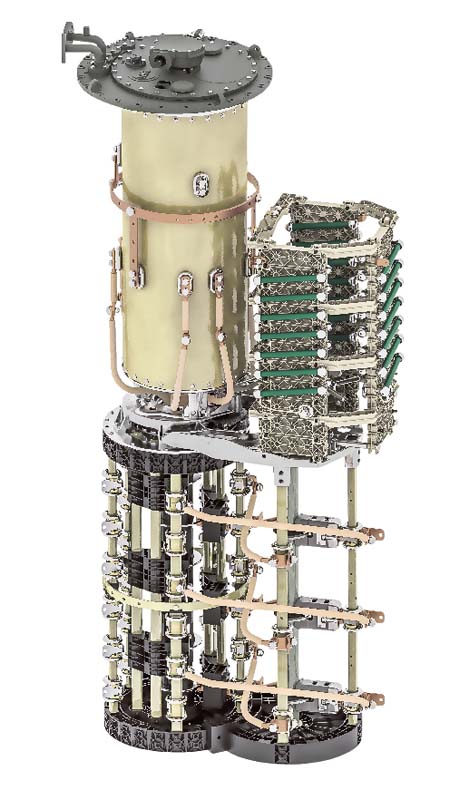 If the power should fail, millions of people would be without electricity. When it came to the on-load tap-changers, Siemens therefore used the VACUTAP® VR® from Maschinenfabrik Reinhausen (MR). Silke Schwarzwälder, Portfolio Manager for tap changers at MR, explains: “The vacuum on-load tap-changer VACUTAP® VR® is the most suitable option for the extra-high-voltage range and therefore for HVDC applications. It is also very dependable in operation.” The VACUTAP® Advanced Arc Control System enables the reliable quenching of the switching arc and the VACUTAP® Step Protection System® offers protection against overvoltages.

Another advantage is that the VACUTAP® VR® is extremely economical, as it is capable of performing 300,000 tap-change operations without any maintenance. The diverter switch insert can be used for 1.2 million tap changes before needing to be replaced. “The converter stations are located in very remote regions, which means that they need to be low-maintenance,” explains Schwarzwälder.

The longest bushings in the world

The vast transformer dimensions also presented other suppliers with enormous challenges. This included the global market leader in high-voltage bushings – HSP Hochspannungsgeräte GmbH from the German city of Cologne. Marcus Cramer von Clausbruch, Regional Sales Manager at HSP, describes the scale of the project: “We built a separate plant to produce the 1,100 kilovolt DC bushings, as the existing hall was too small.” The bushings produced by HSP for the HVDC transformers are 19 meters long and weigh 15.5 metric tons. Yet another record! These are the longest and heaviest transformer bushings on the market to date.

„There are not many companies that can produce hollow insulators of 15 meters in length.”Marcus Cramer von Clausbruch, Regional Sales Manager at HSP 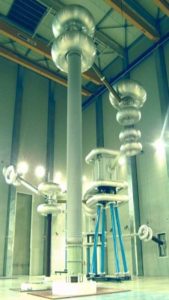 The Bushing of the transformator in the test field of HSP Hochspannungsgeräte GmbH. (© HSP)

“With AC voltage, these kinds of bushings only weigh one metric ton,” explains Cramer von Clausbruch. HSP is one of the few companies anywhere in the world that can produce bushings in such large dimensions using resin technology. The solid active component consists of resin-impregnated paper (RIP), which means that the bushing is free from oil. “This requirement was stipulated by China, as oil is too high a risk factor when used with these components for extra-high-voltage applications.” For the insulation, HSP used hollow composite insulators with shielding from Reinhausen France SAS. “There are not many companies that can produce hollow insulators of 15 meters in length which also satisfy the demanding specifications,” explains Cramer von Clausbruch.

Alongside the insulating properties, protection against earthquakes was also an important requirement. “We’re talking about 1,200 kilovolts here. If that goes bang, then you really know about it!” To prevent this from happening, HSP has tested the bushings extensively. “Even the routine program on a bushing takes five days,” says Cramer von Clausbruch. The Regional Sales Manager sees great potential for the future of such applications: “The generation and transmission of large quantities of energy is growing in significance all over the world.”

You can find more information on the VACUTAP® VR® at:
www.reinhausen.com/vacutapvr

Any questions on the vacuum on-load tap-changer?
Silke Schwarzwälder will be happy to advise you:
sales@reinhausen.com

You will find more information on our expertise in the field of hollow composite insulators here: www.reinhausen.com/rpc

Any questions on our hollow composite insulators?
Then please contact:
rpc@reinhausen.com