What will the world look like when MR turns 300? Join us for an electrical odyssey into the future.

Science-fiction writers all agree on one thing: The future is electric. Whether the story involves a megacity, a space­ship, or a giant robot: Every­thing beeps, pulses, and lights up. Depending on which fantasy world we are inhabiting, the necessary power might come from fictional dilithium crystals, orbital solar collectors, or matter/antimatter reactors. Sci-fi authors are always coming up with new ideas in this area.

They don’t seem to spend quite as much time, however, think­ing about how the power will get from A to B. But the cleanest method of energy use will only bring about real global progress when users can reliably draw power from the socket. And that is precisely what we are unable to guarantee with the means we currently have available, as the grids are not yet fit for the future. What does that mean? To answer that question, let’s take a look at the concepts of consumption and generation.

There is no stopping the growth of the world’s population. In a few decades, it will pass the 10-billion mark. All of these people need energy: for electrical power, for cooking, for mobility, and for heating and cooling. At the moment, almost 80 percent of primary energy sources are fossil fuels. And we all know what the consequences are when we burn these fuels. Experts agree that rapid electrification is the only way to achieve the decarbonization that we urgently require. This shift, combined with the growth in population, will increase the absolute electricity demand. 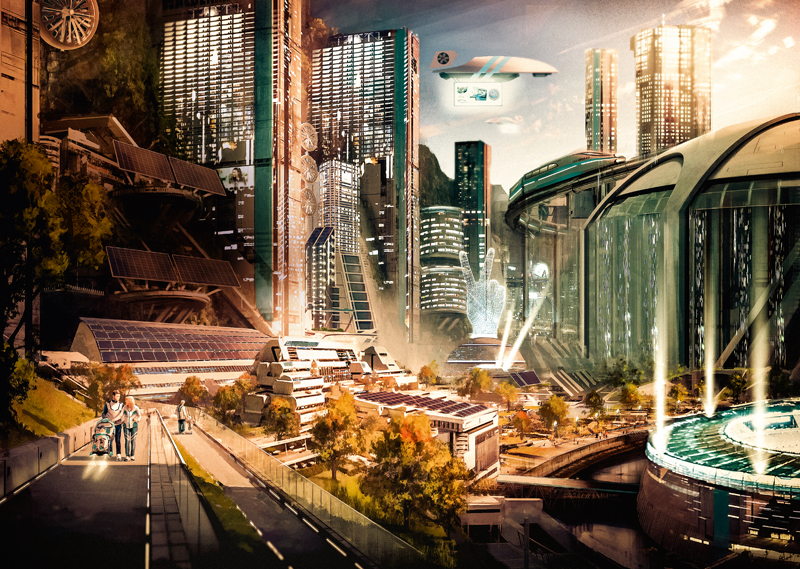 As the world’s population grows, more and more people will live in megacities. They will need huge quantities of power in order to live, work, and travel. (© Peter Bartels)

The increasing demand per capita will result in further acceleration. This also applies to mature economies, even though technology is becoming more and more energy efficient. The simple truth is that once you start using devices, you find you need more and more of them. The accumulation of lots of little energy guzzlers is an integral part of the concept of the smart home, to say nothing of the server farms that will be popping up everywhere. In the newly industrialized countries, demand is rising even more quickly. As it would be far too expensive to establish line connections to a power grid, remote regions plan to use off-grid solutions – supplied via a combination of renewable sources – for the purposes of electrification. Power will bring light and internet access – according to sociologists, these are the key prerequisites for achieving social development through education in these regions.

Away from the remote regions, the global trend toward urbanization will result in large metropolitan areas – by 2035, it is estimated that two thirds of the world’s population will be living in cities. It is impossible to imagine an infrastructure for clusters with 30 million inhabitants or more with­out extensive electrification. Thanks to advanced battery technology, commuters will use autonomous electric taxis to get to work. The next generation after that may well be using electric helicopters.

So the message is clear: Decarbonization is only possible with extensive electrification. Just under a quarter of the world’s primary energy consumption is currently used to generate electricity. Over 75 percent of the electricity is still produced from fossil fuels. So if the experts believe that everything should be electric, is this a gigantic global problem that cannot be solved? Not at all – because electrification provides a huge range of options when it comes to converting between different types of energy (“power-to-X”) as well as a choice between centralized and dispersed solutions.

One for all or all for all?

At the moment, western industrial nations and emerging economies such as India, China, and Southeast Asia generally have large-scale fossil-fuel power plants with large rotating turbines and generators which were built fairly close to the load centers and to each other (effectively regionally cen­tralized).

This approach has several advantages:The large rotating masses of the centralized power plants have so much stored energy that they have a stabilizing effect on continual consumption fluctuations and increasing volatility in the grid caused by feed-ins from renewable sources – when a subway train starts up, it doesn’t cause the grid to wob­ble. There is no need for long cables to transmit power over large distances. The relative proximity ensures high levels of resilience and availability for the overall system.

„In tomorrow`s world, the Focus will be on charging rather than burning. If we want to save the planet, the power we use Needs to be clean.”

If we are going to form teams for the future, there are essentially two sides to choose from: the centralized solution and the dispersed solution. The first team wants electricity to continue to be generated in large-scale power plants based increasingly on renewable sources. These kinds of plants already exist in the form of offshore wind farms, large-scale PV power plants, and hydroelectric power plants.

These centralized renewable approaches require a transregional “supergrid” with a high transmission capacity (and therefore potentially high vulnerability) to even out the supply and compensate for the volatility of the renewable sources. And solutions also need to be found with regard to the loss of the inertia from the large rotating masses. This is not such an impossible task – the generator of the decommissioned Biblis nuclear power plant, for example, is now used as a “rotating phase shifter” for precisely this purpose. 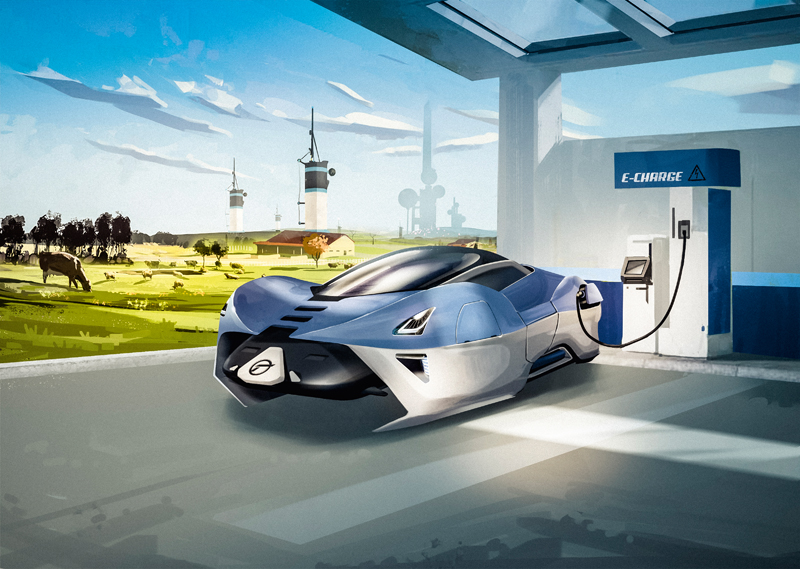 In all probability, we won’t have a centralized solar power plant orbiting the Earth in 150 years. But why should we assume that our children’s children – who might well greet our current approaches with an indulgent smile – won’t find their own new solutions? And if, in 150,000 years, we are putting the finishing touches to a Dyson sphere around our sun, many of our problems could indeed be solved.

If you’re not convinced by the centralized ap­proach, you might be a fan of the dispersed solution instead: Having lots of small-scale producers of renewable energy generating power, taking what they need, and feeding the rest into the grid in order to compensate for the deficits of other producers. Perhaps in 150 years every centimeter of roof space will be covered with high-performance photovoltaic installations so that everyone can help each other out. This won’t make the megacities self-sufficient. They will still need an “umbilical cord” to connect them to large energy sources from the grid.

In this context, China’s govern­ment is already dreaming of a global grid capable of moving power all over the world. Alongside the necessary technology, the dispersed solution also requires better storage options than the ones currently available. “Power-to-X solutions” for example, where hydrogen or methane is produced from wind or solar power in several stages, stored in huge caverns, and then burned in a climate-neutral process in a power plant or mobile system when needed.

Educational Mission for the Grids

Now we have reached the point where we have to talk about transporting power – the part that sci­ence fiction so shamefully fails to address. Whether you favor the centralized or dispersed solution, the gigantic amounts of power that we will need by 2168 will have to actually get to the consumer some­how. People often cite analogies of our transition from a wired telephone system to broadband wireless transmission as proof that we could switch to wireless power transmission in the future. But although they might not belong in the realms of sci-fi, there are often simple physical reasons why these ideas cannot be achieved in reality.

We might potentially be capable of sending energy from a solar power plant in geostationary orbit to the Earth via microwave radiation even now – but good luck to any creature or device that gets in the way of the rays. Bridging large distances using induction is a similarly capricious process from a physical perspective. So we won’t be abandoning cables that quickly, particularly as we can’t simply replace the existing infrastructure overnight.

But the grids are still going to change, partic­ularly when it comes to grid management and state assessment solutions. This will present grid oper­ators – and therefore manufacturers like MR – with major challenges. If we are heading toward a dispers­ed solution in the future where the grid is divid­ed into micro-grids for separate parts of the city or nano-grids for single households, we will need a new way of thinking. 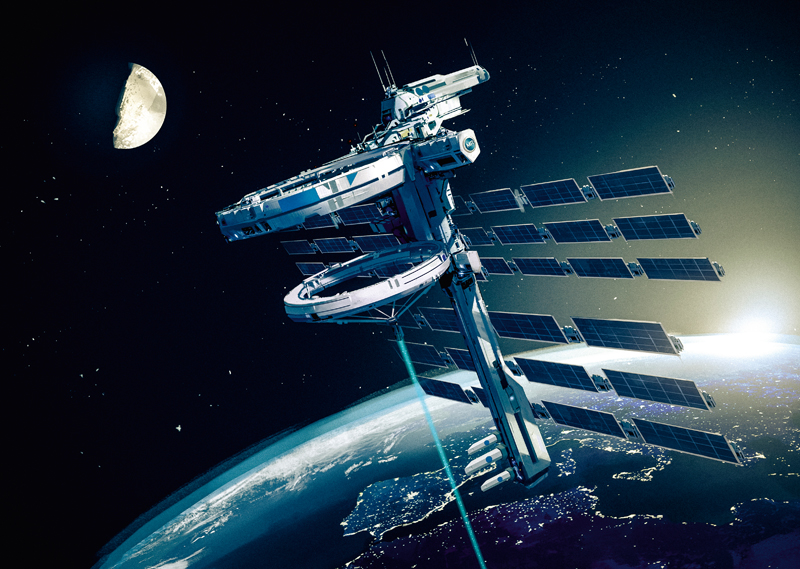 We don’t know yet whether solar collectors in space will be producing our electricity in 150 years. But new approaches to energy production are definitely required. (© Peter Bartels)

Today’s centralized approach to managing power generation and distribution will become obsolete, as decentralization will cause grid management requirements to rise exponentially. Grid operators will have to keep track of countless interdependent factors. What level of energy demand is expected tomorrow? What will the weather conditions be like? How full are my energy stores? And so on and so forth. All of this will result in huge volumes of data that can only be processed with a quantum computer linked to the cloud. But will such a thing exist in 150 years? That is why we need the right software solutions.

Both solutions also pose certain challenges in terms of resilience. Central infrastructures in particular, like the large “umbilical cords”, need to be protected against attacks. More dispersed solutions have the intrinsic advantage that they can form more inherently stable cybernetic systems. If one part is switched off, the rest of the system keeps running. After an attack, traffic would keep moving, the lights would still be on in hospital operating rooms, and Netflix 4D would probably still be working on most TVs (or, in 150 years’ time, maybe on video interfaces implanted on our optic nerves).

“The Change in the energy industry will be radical. Intelligent Software will increasingly replace functional Hardware.”

Meanwhile, the fault can be identified and rectified in the background and everything can quickly be brought back to full capacity. However: Complex, networked, dispersed systems require sophisticated, intelligent system architecture. It took evolution a few million years to create the semi-successful, semi-resilient cybernetic system known as the human being. At least we keep breathing after a knockout – promptly followed by a reboot and a headache.

The change in the energy industry will be radical, as decarbonization will push us toward more decentralization. This will change the hardware of today’s workhorses – the actuators – and will require much more intelligence when it comes to grid and system management with sensors and communication and software. Power electronic solutions will gradually replace conventional transformers. MR’s products will be focused on this area in 50 years’ time – we know that already. Change brings great opportunities with it, and companies need to take action if they want to be successful.

We need to face the future with courage rather than fear. We don’t know yet what life will be like in 100 years – that will all depend on what happens between now and then. And however huge this change may be for grid oper­ators and their suppliers, the effect on the average electricity consumer in mature economies will not be so severe if politicians finally manage to create the right framework conditions for a comprehen­sive decarbonization energy revolution. The impact is likely to be felt more strongly in the newly industrialized countries and megacities – with radical changes to energy use in a future that, for now, still seems to belong in science fiction. We’re ready for the future – bring it on!