“Good Active Filters Think for Themselves”

What problem did Volkswagen approach you with?

Conventional harmonic stresses on long power rail extensions. But Volkswagen particularly wanted to be prepared for an expansion of the production line at the Zwickau plant; for example, with additional welding systems and other frequency-controlled drives. Our main task was to make the plant grid fit for this purpose.

What did you need to do this?

Several active filters in strategic locations. When disruptive harmonics occur in the plant grid, our active filter feeds in targeted currents of the same frequency in phase opposition to neutralize the interference. Production runs smoothly, machines last longer, and energy consumption decreases. That’s good, but it’s not the exceptional part.

So what is the exceptional part?

Our new generation of active filters can think for themselves. The active filter only needs to be parameterized once. It can then independently adapt itself if grid conditions later change – for example, if production lines are expanded or transformers are connected or disconnected. And when it eventually reaches its output limit, it will continue to run at maximum load and will not switch off due to overload. In addition, as the system has a modular design, an MR service engineer can easily retrofit it in just a few simple steps. 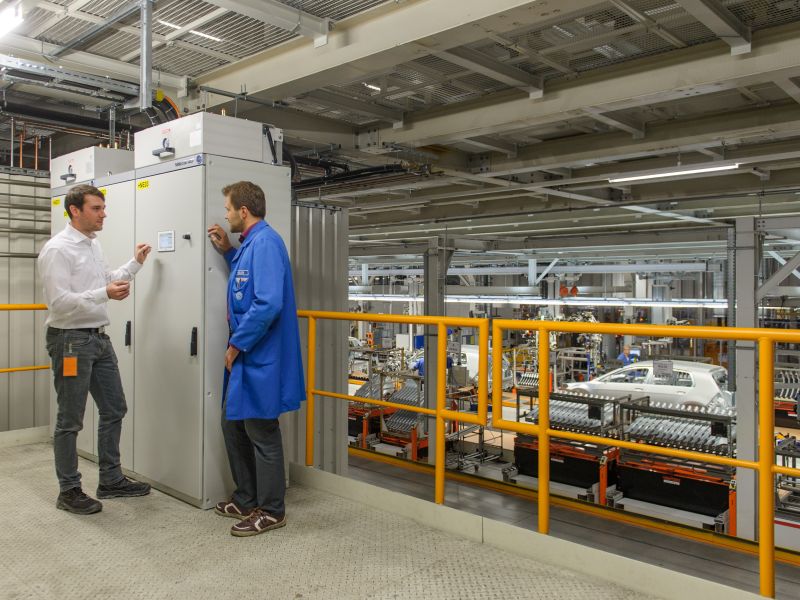 Knispel discusses the optimum active filter parameters with a VW employee at the Volkswagen plant in Zwickau. A single parameterization is enough – then the system adapts itself independently to any changes. (© Helmut Koch)

What was especially important for Volkswagen?

The „fast resonance detection” monitoring technique and the Limit U function. In large plants, such as in the automobile industry, it is common to have meshed grids where several transformers feed a grid segment in parallel. As soon as transformers are switched off during low-load periods, or something else changes, the grid impedance also changes.

An active filter can then unintentionally trigger a resonance point in the grid. Our control software detects situations like this within seconds, and the active filter then continues to run normally with adapted control parameters. With the Limit U function, the customer can set the active filter to dampen a percentage of the harmonics rather than damping them 100 percent—which saves energy.

Did Volkswagen require any adjustments?

Volkswagen has found that the switching systems in some plant sections are easily contaminated with metal dust, which increases the maintenance requirements. Therefore, the company requested hermetically enclosed housings for some of the active filters. That was not a problem, but it did mean that air cooling was no longer an option. We therefore decided to go with a water cooling system. For this purpose, we simply used the existing cooling water circuit of the laser welding system. Reliable vehicle production: At Volkswagen in Zwickau, the new generation of active filters ensures stable and clean voltage in the plant grid. Tobias Knispel, Project Engineer at Maschinenfabrik Reinhausen (MR), describes the sophisticated technology that impressed the global corporation.

Lorem is ipsum – not a dolores

Up to 1,350 vehicles are produced every day at the Volkswagen in Zwickau plant in Zwickau. www.volkswagen-sachsen.de

GRIDCON ® ACF active filters stabilize the grid quality in industrial companies. With up to 500 A per cabinet, the active filter offers a lot of power combined with compact dimensions.