Power outages are a steel manufacturer’s worst nightmare. Accaierie Bertoli Safau relies on digitized transformers to keep the electrons and, hence, the steel flowing without any interruptions.

Daniele Giro would love it if his transformers could talk to him. They could tell him on their own when they are break ing down or need maintenance. Any outage wears on his nerves and costs his employer a fortune. Without power, the production of Accaierie Bertoli Safau (ABS) is at a standstill. The losses are gigantic in this case: Every hour, the two electric arc furnaces in the steelworks near the northern Italian city of Udine melt around 200 tons of scrap metal down into valuable special steel for the automotive industry, the railway or for gas pipelines. 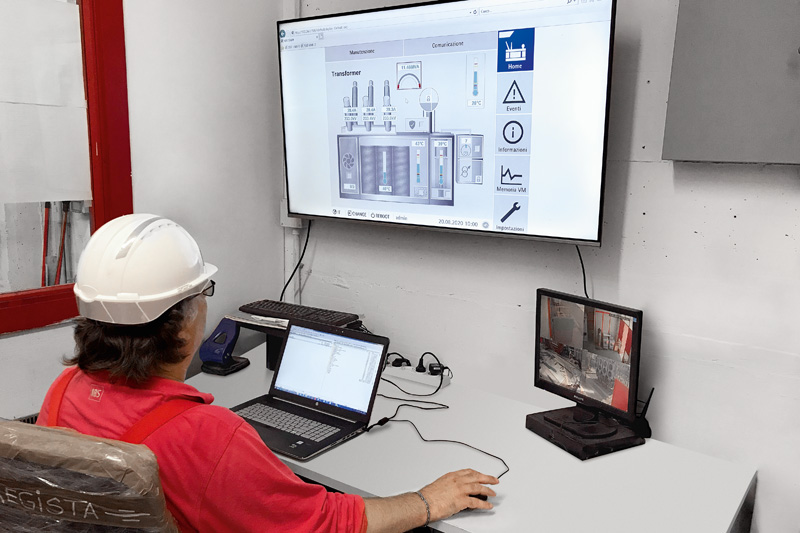 Daniele Giro, head of high and medium voltage distribution, can check the status of the transformer directly from his control room. 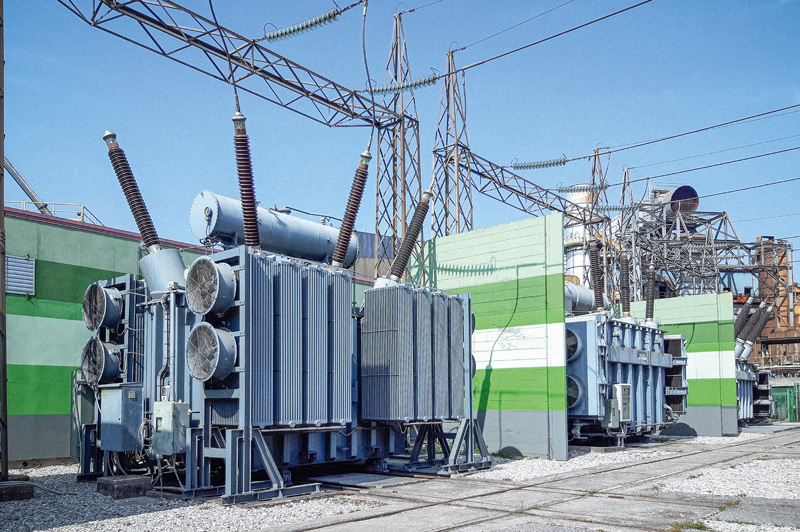 A total of nine transformers keep the voltage stable at the ABS plant.

Measured by average price per ton, this means that several tens of thousands of euros per hour would quickly go down the drain for the company. “If you consider that it sometimes takes several days for a defective transformer to get up and running again, you can image how great the loss is,” says Giro. As the head of high and medium voltage division, he is responsible for keeping the plant grid, with nine big oil transformers and around 30 MV electrical rooms, stable and failure-free.

This is no easy task—ABS alone consumes approximately the same amount of energy as the eintre city of Udine with its 100,000 inhabitants. This is primarily due to the two electric arc furnaces, the core of the steelworks. They function like an oversized welding unit. Inside the melting pot, there are electrodes made of graphite through which thousands of amperes pass. This causes electric arcs between the electrodes that increase the temperature to more than 2,000 degrees Celsius. This makes it possible to melt hundreds of tons of scrap steel in one ﬁlling every hour. “We basically recycle the material and give the scrap metal new life,” says Giro.

The company was founded in 1988 from the fusion of the two steelworks “Officine Bertoli”, founded in 1813, and “SAFAU”, founded in 1934. The company is part of the Danieli Group and today employs around 1,000 workers at the two production locations in Cargnacco in Udine province and Sisak in Croatia. It also has its own research center in Metz, France.

The plant gets the energy needed for this over a high-voltage line. Two step down trans formers ﬁrst regulate the voltage from 230 kilovolts to 21 kilovolts, which reach the production systems via the plant’s internal grid. Four power transformers are used for the electric arc furnaces alone. They have the tough est job. With around 200,000 tap-change operations per year, the on-load tap-changers switch more frequently than many similar units in a typical primary substation do in their entire service lives. Three additional transformers are responsible for the supply of the remaining systems, such as the rolling mills.

HOPE IS NOT ENOUGH

Giro and his two co-workers have their hands full with keeping the technology running in this harsh environment. “It would be best if we could make a system where interruptions never happen. While that is just a dream, we are doing what we can to get close to this ideal.” Since Giro started at ABS six years ago, he has constantly been looking for solutions to better monitor his transformer ﬂeet. Currently, he has only had two periods for year in which he is able to thoroughly check the transformers and per form maintenance work: during three weeks of summer downtime in August and two during winter downtime over the Christmas holidays.

“I would like to have a system that allows me to check the condition of my transformers at any time throughout the year.” Daniele Giro,Head of high and medium voltage division, ABS

But what happens between these two periods? Giro has only been able to hope that the maintenance work has been enough and everything runs well. Actually, that wasn’t enough for him. “ I would like to have a system that allows me to check the condition of my transformers at any time throughout the year.” The visit two years ago by Stefano Vignali, Area Sales Manager at Reinhausen Italia, was opportune. The two companies have had a longstanding relationship—on-load tap-changers from Maschinenfabrik Reinhausen are in- stalled in all transformers at ABS, and the regular service work by MR-technicians leads to active discourse. Vignali had come to introduce the ETOS® automation solution (see box). 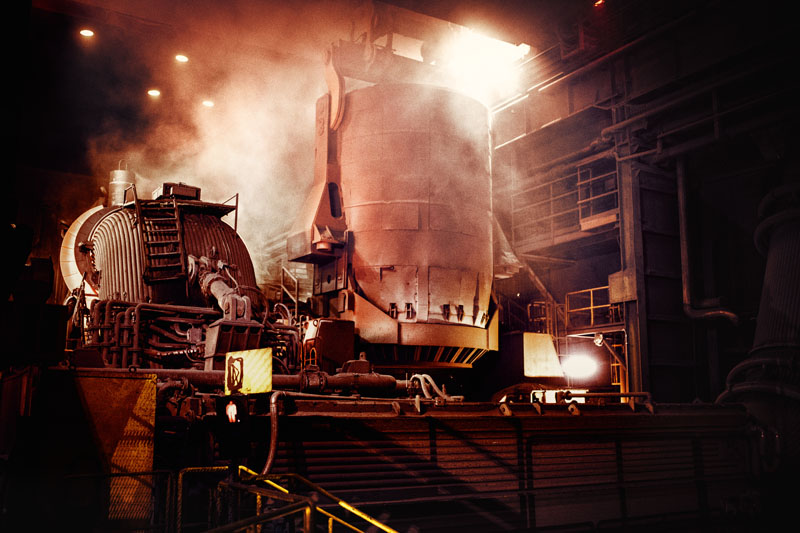 The electric arc furnaces in the steelworks consume as much electricity as an entire city.

The open operating system makes it possible to monitor, control and regulate power transformers. “The system has a modular structure, so the users can decide for themselves which components of the transformer they want to monitor. Subsequent installations are also possible,” explains the Reinhausen expert. For example, this can include monitoring the bushings and the transformer’s oil or the intelligent control of cooling systems. For Vignali, it is clear that ETOS® creates more security. “In steelworks, cement plants or any factories that have a power transformer, monitoring is extremely important. I know of companies that just have one transformer — when it fails, all production goes down.”

TOILING IN THE HEAT

Giro was primed to accept this suggestion. The ABS philosophy is to always invest in new technologies. As a member of the Danieli Group, a leading plant manufacturer for the metallurgical industry, ABS has the option to try out technology that is not yet on the market. “Experimenting is important,” says Giro. He did not shy away from experimenting, even with his most important pieces of equipment. Still, he played it safe at ﬁrst. To learn more about ETOS®, Giro decided to use it initially on two trans-formers and with all available modules—because if it’s worth doing, then it’s worth doing right. One was a transformer that has already been in operation for several years; the other was a brand new one which ABS commissioned from an Italian transformer manufacturer.

“The information collected by the system is hugely important for us. For the first time, we have the option of tracking the condition in real time and are also learning more about the transformer.” Daniele Giro, Head of high and medium voltage division, ABS

The retroﬁt on the existing transformer was performed during the downtime in August 2020. In muggy heat with temperatures of 39 degrees Celsius, the Reinhausen technicians worked, attaching the preconﬁgured ETOS® control cabinet to the transformer, wiring the sensors and ﬁnally checking everything for function. The work began on a Monday and was ﬁnished on Friday.

Since then, Giro has taken a signiﬁcant step toward his wish for a talking transformer. He can trace what is occurring within the transformer in detail on his screen in the control room. In principle, Giro could even access the condition data from any computer in the plant. This is made possible by the integrated web server in the central processing unit in the ETOS® control cabinet. Giro can read the temperature in the windings, learn more about the quality of the oil and, of course, control the on-load tap-changer from anywhere. In addition to the options for monitoring, ETOS® also makes intelligent control of the transformers possible—such as the on-load tap- changer or the cooling fans. Daniele Giro plans to digitize all of the transformers on a gradual basis.

This enables more efﬁcient operation, and thus energy savings. “The information collected by the system is hugely important for us. For the ﬁrst time, we have the option of tracking the condition in real time and are also learning more about the transformer. Now, we know how it responds to certain events in operation. We are still at the beginning, but I suspect that the signiﬁcantly improved data situation gives us a much better basis for decision-making and we will be able to plan better. We have taken the ﬁrst step.” He does not want to lose too much time on the next steps. In the next three years, the automation of the other transformers is set to progress rapidly.

ETOS ® – the Embedded Transformer Operating System – is an open, modular system solution for monitoring, controlling and regulating power transformers. There are six function packages to choose from depending on the monitoring requirements.

ETOS® can be integrated or retrofitted seamlessly in any environment and forms the interface between the process and control levels in the field level area. 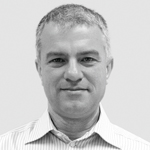 Do you have questions about ETOS® and the project at ABS?
Stefano Vignali is here to help:
S.Vignali@reinhausen.com