London needs more and more energy, but it is running out of space. The city has therefore constructed an electricity tunnel deep underground. To eliminate the risk of a catastrophic blackout, mobile test systems checked every single section of cable.

Darkness in front, darkness behind. Every few minutes, a rumbling tube train speeds along above his head. Then everything becomes quiet again and every word disappears into the darkness, just like the light from the work lamps.

Andreas Weinlein from the cable manufacturer Südkabel GmbH in Mannheim still can’t help shuddering slightly when he recalls his time work­ing far below London. As Head of System Engineer­ing, he was responsible for laying and testing high-voltage cables over a distance of just under 32 kilometers. 200 kilometers of cabling were required in total, as there had to be enough for three phases as well as the connections to the primary substations. The work was carried out in three construction stages from 2010 to 2017. The customer: National Grid, the British transmission system operator.

Heading down under the Megacity

London is a ravenous consumer of power. The megacity already devours 20 percent of the total electricity used in the United Kingdom. And each year it gets greedier. Demand is rising by three to five percent per year on average – twice as much as in the rest of the country. The city’s power network is groaning under the strain and is starting to reach its capacity limits. Many of the cables below the city were laid 40 or 50 years ago and are based on the outdated technology of oil-paper insulation. “These days, state-of-the-art cables have insulation made from cross-linked polyethylene,” explains Weinlein. 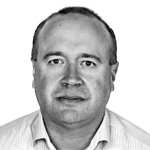 “Connecting high-voltage cables is a complex process. They cannot be connected to the power network without extensive testing.” Andreas Weinlein, Head of System Engineering at Südkabel GmbH

These XLPE cables are safer, as they prevent oil getting into the groundwater, and they are also cheaper to maintain. In one of the largest infrastructure projects London has seen for decades, National Grid therefore decided to replace the old 275 kV oil-filled cables with modern XLPE cables which, at 400 kV, significantly increase the transmission capacity.

The old oil-filled cables are located directly below the road surface. Laying new cables in the same place would have meant tearing up the roads, resulting in never-ending congestion throughout the already traffic-plagued city. National Grid there­fore decided to head further down and dig tunnels.

But the city is growing underground as well, with networks of shafts from the tube system, sewer lines, and a warren of road and pedestrian tunnels. National Grid therefore had to go even deeper: 12 to 60 meters into the earth. This is where they drilled the cable tunnels, which have a diameter of three to four meters and have been designed to accommodate more cables in the future if required. There are shafts at regular intervals which lead to daylight and connect the underground line to the primary substations. 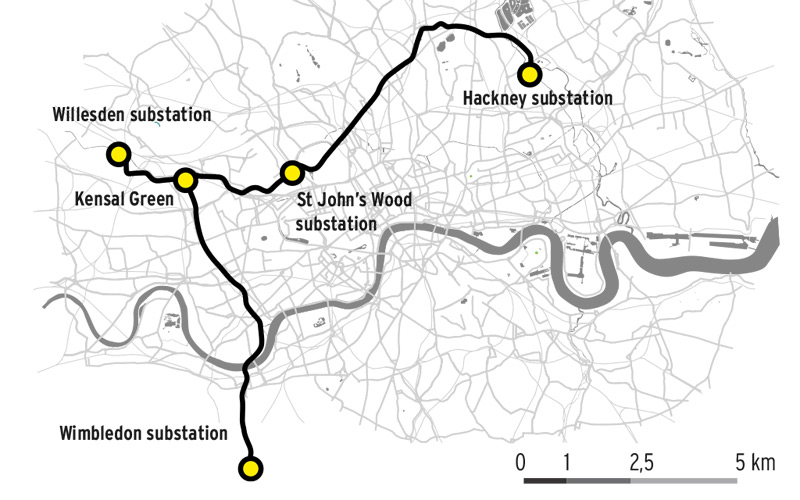 The Power Tunnel Project in London: The tunnel system for the 400 kV cables is just under 32 kilometers long in total. Shafts connect the line to the primary substations on the surface. (© shutterstock) 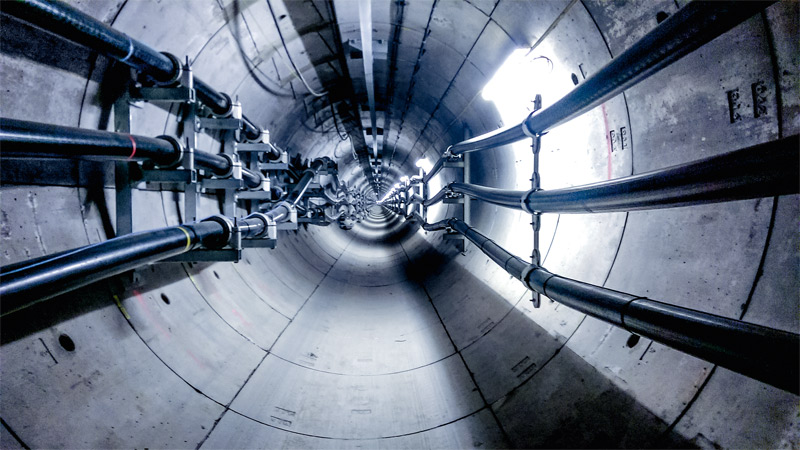 Laying the cables at a depth of up to 60 meters requires a huge amount of specialist knowledge from the technicians. (© Südkabel GmbH)

However, before the first meter of cable could dis­appear down into the depths of the city, the material had to get to London first. Following comple­tion and final inspection at the factory in Mannheim, Südkabel transported 200 kilometers of cabling in total along the Rhine and over the North Sea to the British capital. The cabling was trans­port­ed on 182 drums, each weighing 40 metric tons. In­stalling the cables on site was the next challenge. “Connecting high-voltage cables of this nature is a complex process – they cannot simply be assembled like a normal extension cable,” says Weinlein.

Südkabel’s technicians connected the cables using special sleeves. As it is a three-phase system, they had to fit three sleeves at every single connection point. The process took a week and a half for just one set. “Every millimeter counts. You won’t find this information in any textbook – it requires a huge amount of experience.” The technicians followed the construction drawings to the letter and made sure that nothing was contaminated – all while working in a narrow tube dozens of meters under the hustle and bustle of the city.

A single error during assembly could lead to a catastrophe: “If there were an error and the line were connected to the power network, it would cause breakdowns and large parts of London would go dark.” To make sure this doesn’t happen, the cables are tested prior to commissioning so that any problems can be rectified beforehand. “After assembly we can’t see into the cable system; it’s not transparent. We can only detect errors by applying a test voltage and taking a partial discharge measurement at the same time,” says Weinlein. The partial discharge measurement detects discharges in the cable which could cause a sparkover in the equipment.

The global market leader for such test systems is HIGHVOLT in Dresden. Since 2002, the company has been part of the Reinhausen Group. HIGHVOLT is a pioneer when it comes to testing XLPE cables in high-voltage applications. The company produced the world’s first mobile test system for 400 kV cables for a project in Berlin in the 1990s (see “Cable Unifica­tion” box). It was at this time that XLPE was taking over as the preferred insulation material for high-voltage applications. Previously, the oil-filled or gas-filled cables that were used for underground installation had been tested by testing institutes using direct current. However, it soon became clear that this method was not suitable for XLPE cables.

Michael Hensel, Area Sales Manager at HIGHVOLT, explains: “There were cases where testing with DC voltage would always produce positive results, but then we would see cable defects on a regular basis during operation”. This is because, as a highly insulating material, crosslinked polyethylene can hold charges for days. When the cable is then connected to the power network, the internal and external fields are added together, caus­ing localized overloading of the insulation.

After the fall of the Berlin Wall and the political reunification of Germany, another area that required unification between East and West was that of their energy supplies. In the mid-1990s, the Berlin-based energy provider BEWAG decided that the new connecting line between the Tiergarten district in the West and Friedrichshain in the East should be laid underground for space reasons. A 6.3-kilometer-long tunnel was drilled to house the cables. This was the first time that a company had dared to use 400 kV cables insulated with crosslinked polyethylene (XLPE). However, there was no suitable test system available for this voltage level and cable technology.

HIGHVOLT was therefore commissioned to develop an appropriate test system. The engineers drew on ideas developed in collaboration with the Fachkommission für Hochspannungsfragen (High Voltage Testing and Engineering Commission; FKH) in Zurich during the project. Since then, the testing method has become standard for commissioning tests performed on extruded high-voltage cables.

A different type of testing technology was there­fore required. The challenge is that, as the test voltage is higher than the operating voltage, the test system needs to be designed so that power can also be supplied on site. “We have to work with mobile generators – we can’t simply set a power plant next to the test system,” explains Hensel. HIGHVOLT therefore decided to base its solution on a system that was already in use for on-site testing of gasinsulated switchgears: resonance testing with AC voltage and variable frequency. “Our test systems work in the range of 20 to 300 hertz, so relatively small generators are enough to supply the power we need,” says Hensel. To keep the test system mobile, the HIGHVOLT engineers designed it to fit on a truck trailer. 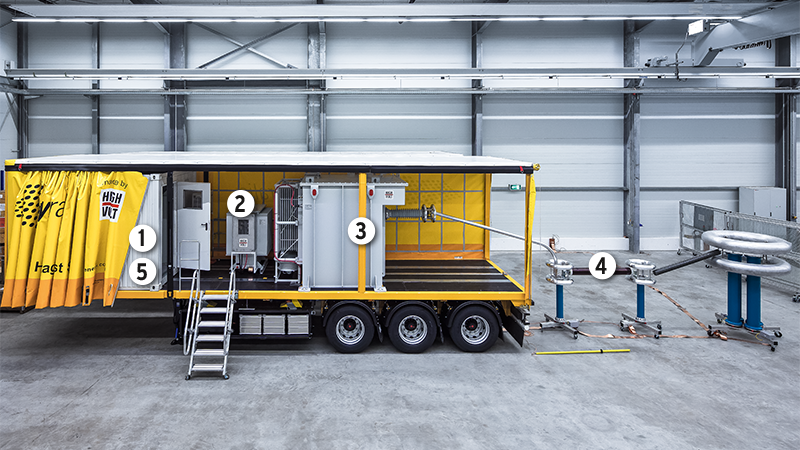 The test system fits on a truck trailer and comprises a frequency converter (1), which also controls the test system; an exciter transformer (2); a resonance reactor (3) with fixed inductance; and a capacitive voltage divider for measuring the test voltage (4). The engineers can observe the measurements from the test cabin (5). An individual test system is designed for tests up to 260 kV and 83 A and can be used to test high-voltage cables with a length of several kilometers. If higher test voltages are required or cables with lengths of up to a hundred kilometers are to be tested, multiple test systems can simply be connected in series or parallel. (© HIGHVOLT)

If the test system registers a flashover, it shuts down with­in microseconds. As only a small amount of energy is introduced at the defect point via the resonance effect, the damage is less dramatic and defects can be identified more easily and repaired more quickly.

“Under operating conditions, the repair costs would be significantly higher as the power plant would just keep going.” 300 test trailers are now in use all over the world – in America, Europe, Asia, and Australia. “There is definitely a trend toward placing higher and higher voltage levels underground. No one wants to have transmission towers right in front of their door, plus they take up a lot of space. And space is hard to find in large cities,” stresses Hensel.

Weinlein confirms this trend. “Südkabel is carrying out cable projects like this in many major cities. In addition to London, we have also recently installed cables in Moscow.” The expert often performs the final inspections together with the testing institutes who provide the HIGHVOLT systems for the tests. “With these sorts of tests, there are so many things that need to be decided on the spot, and you might need to replace a sleeve somewhere as well. The partial discharge measurement in particular is very complex and it is incredibly important to draw the right conclusions from the values.” In London, two test trailers were used as the longest section to be tested measured over 12 kilometers. “In this case, the systems are simply connected in parallel.” In total, the commissioning tests took a week to complete.

The tunnel was officially opened at the start of 2018 with a bit of royal assistance: Prince Charles and Camilla pressed the start button as the song “I’ve got the power” played out. Thanks to the new cable system, the megacity’s appetite for power can now be satisfied for another forty years.