The actual energy revo­lu­tion is taking place in distri­b­u­tion grids. That is where more than 90 percent of producers feed in energy. A research project is deter­mining what distri­b­u­tion grids will look like in the future. And it is based on grid-forming storage units from Rein­hausen.

At first glance, the district of Nieder­bobritzsch, Germany is a commu­nity like thou­sands of others: a church, farms, busi­nesses, a small factory, a few super­mar­kets and about 800 house­holds. If you look closely, however, you will also find a gray container. This is the visible sign that the future is being written in Nieder­bobritzsch, near the Saxon city of Freiberg, where elec­tricity supplier MITNETZ STROM and Rein­hausen, together with two univer­si­ties, are researching how to success­fully imple­ment the energy revo­lu­tion. 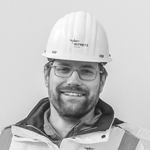 “The energy revo­lu­tion is taking place primarily in distri­b­u­tion grids. That is why we need research.”Jens Schwedler, Project Manager at MITNETZ STROM

To manage this, tremen­dous quan­ti­ties of addi­tional elec­trical energy will have to be trans­ported through grids in the future. In partic­ular, the decar­boniza­tion of the heating and trans­porta­tion sectors will strain the grids in the years and decades to come (see ONLOAD 07). Grid oper­a­tors are looking for new solu­tions to expand the grids. At Rein­hausen, Stephan Rupp and Dirk Wüsten­berg are working intensely on the topic. “We’re looking for new answers to the ques­tion of how grids will be able to absorb the growing amounts of energy and how, at the same time, to close the gap between gener­a­tion and demand that results from the increasing volatility,” says Busi­ness Devel­oper Rupp.

Over the course of the energy revo­lu­tion, solar elec­tricity will have to be greatly expanded in the future. A majority of systems can be found on roofs and facades, meaning that they are in local grids. Directing this solar current through distri­b­u­tion grids to trans­porta­tion grids is not a useful solu­tion. The grid expan­sion would be extremely costly and it would be hard to find customers for the over­supply of solar current around noon­time. By the same token, in the evening hours, large quan­ti­ties of elec­tricity must be drawn from the grid as the demand grows on the consumer side due to charging stations for elec­tric vehi­cles and elec­tri­cally powered heat pumps. 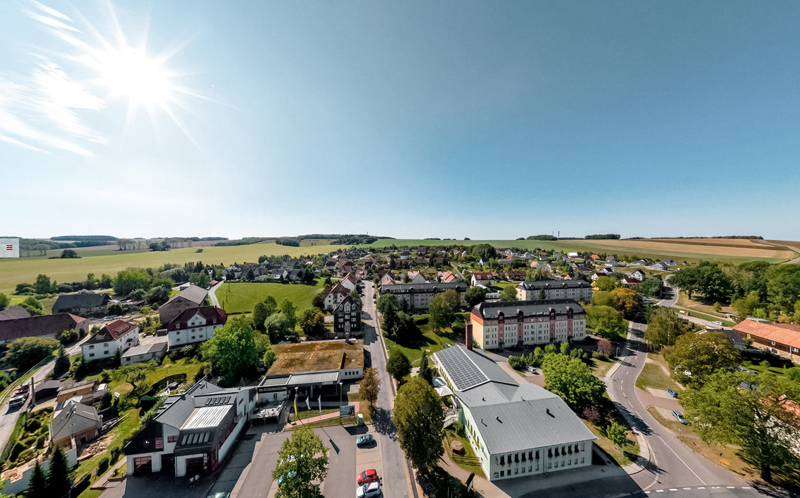 Do you know what to do with excess solar current in distri­b­u­tion grids? Grid-forming storage units are solving one of the most urgent prob­lems of the energy revo­lu­tion. (©360 Grad Team)

The solu­tion might be to make the distri­b­u­tion grids more flex­ible, which means the option to store solar current near the source, i.e. in local grids. Another option for ensuring flex­i­bility is to adjust the demand for elec­tricity to the supply with the help of intel­li­gent load control. And solu­tions that also offer autonomous oper­a­tion of distri­b­u­tion grids in the event of a malfunc­tion would be able to increase the supply reli­a­bility. Jens Schwedler, who works as a project manager on the local grids of the future at distri­b­u­tion grid oper­ator MITNETZ STROM in central Germany, says, “Around 55,000 systems for renew­able energy are connected to our distri­b­u­tion grids.” There­fore, for Schwedler, it is obvious: “In addi­tion to offshore appli­ca­tions, the energy revo­lu­tion is taking place primarily in distri­b­u­tion grids. In order to main­tain the power quality in the future with the increasing volatility of supply and demand, there is an urgent need for action and research today!”

Intel­li­gent control balances the supply and demand. If more elec­tricity is gener­ated in the distri­b­u­tion grid than is needed, the surplus is stored, heat pumps are started up, and elec­tric vehi­cles are charged.

Rein­hausen imple­ments its energy storage solu­tions with this modular inverter/converter system for DC and AC supply in the low-voltage range. The system ensures the power quality and supports a broad range of field-tested appli­ca­tions, such as
the provi­sion of a replace­ment grid. It can be config­ured and enhanced based on customer needs.

For cost reasons, fully expanding the grids and laying them out with new cables and new trans­formers for load or gener­a­tion peaks is not a viable approach. “It takes more intel­li­gent solu­tions to get the volatility under control than just building up expen­sive over­ca­pacity,” says Schwedler’s colleague Jan Schön­feld. In order to research exactly these solu­tions, MITNETZ STROM began a research project two years ago. Since then, Schwedler and Schön­feld have worked together with Mittweida Univer­sity of Applied Sciences, TU Dresden and Rein­hausen as tech­nology part­ners. As part of the project, spon­sored by the German Federal Ministry for Economic Affairs and Energy, they research the advan­tages of decou­pling local grids. 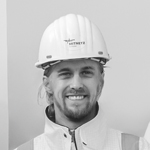 The project has the some­what clunky name “Flex­i­bil­isierung des Netz­be­triebs durch entkop­pelte Ortsnetze” (English: Flex­i­bi­liza­tion of Grid Oper­a­tion through Decou­pled Local Grids), which is short­ened to “FlexNet-EkO.” It focuses on the tran­si­tion from medium-voltage to low-voltage grids. In order to test this future solu­tion in a field test, MITNETZ STROM chose the commu­nity of Nieder­bobritzsch. It is like thou­sands of others in Germany and else­where in the world. There is also an increasing number of solar panels on roofs here. Partic­u­larly in the summer, the momen­tary produc­tion power exceeds energy consump­tion. “Here, we have the phenom­enon of load flow reversal, and the remaining renew­able energy does not appear when the resi­dents actu­ally need the elec­tricity,” says Schön­feld.

One of the current big ques­tions is how to best coor­di­nate flex­ible consumers and gener­a­tors in a local grid, while at the same time ensuring optimal power quality, relieving the burden on existing equip­ment and guar­an­teeing or even increasing the secu­rity of supply.

It is exactly this ques­tion that MITNETZ STROM, Mittweida Univer­sity of Applied Sciences, TU Dresden, and Rein­hausen are tack­ling as part of a research project spon­sored by the German Federal Ministry for Economic Affairs and Energy.

FlexNet-EkO has the following goals:

The four part­ners have now been working together on the idea for more than two years and imple­mented it in a field test in October 2021: How can a modular distri­b­u­tion grid be set up with a power-elec­tronic grid coup­ling? Further­more, can the produc­tion-side and consumer-side peaks be buffered using battery storage units in order to bring demand and supply into harmony within the distri­b­u­tion grid, and reduce reper­cus­sions on the upstream medium-voltage level? 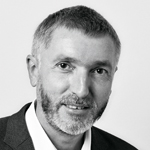 To find the answers to these ques­tions, Rein­hausen contributed its exper­tise in storage tech­nology and power quality manage­ment to the project. “The decou­pling of a local grid with Rein­hausen tech­nology offers us a whole range of possible advan­tages as a grid oper­ator. What we discov­ered, first in theory and then under labo­ra­tory condi­tions, has now been tested in a local grid with 200 house­holds under real-world condi­tions for the first time,” says project member Schön­feld.

In the trial grid in Nieder­bobritzsch, a battery storage unit from Rein­hausen is now in use that stores the excess renew­able energy. The project also focuses on the stabi­liza­tion and harmo­niza­tion of load flows within distri­b­u­tion grids. For this purpose, Rein­hausen also placed a power-elec­tronic grid coupling with a grid-forming inverter in the gray container, in addi­tion to the batteries. 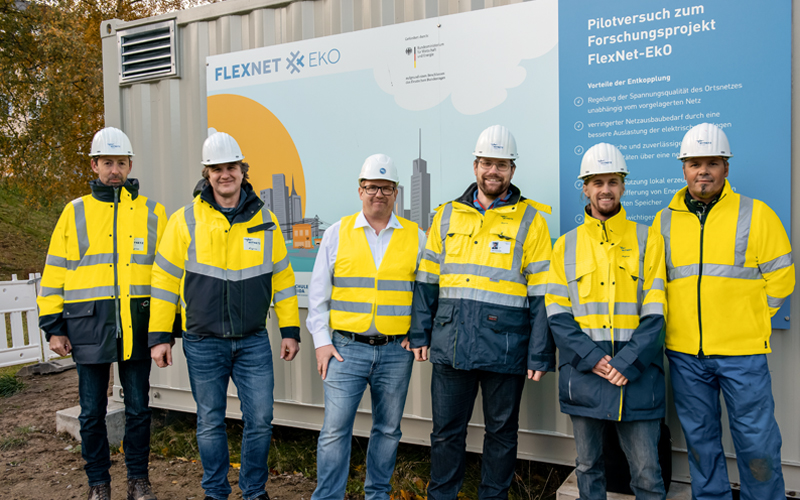 This Rein­hausen tech­nology is already stabi­lizing load flows within the distri­b­u­tion grid under real-world condi­tions. “Now, our task is to gain expe­ri­ence with this new equip­ment and see whether reality matches our simu­la­tion results,” explains grid expert Schwedler, adding, “The theory suggests that inter­fer­ence coming from the medium-voltage level will be filtered out, providing a clean voltage range. We’re now testing what power quality can actu­ally be reached with an inverter and deriving plan­ning and oper­ating criteria from this infor­ma­tion.” 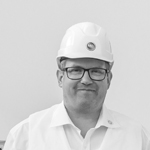 Another aspect is that the tech­nology is also intended to make the grid as a whole more intel­li­gent. MITNETZ tech­ni­cian Schön­feld says, “We can balance the supply and demand using intel­li­gent control. We consume the elec­tricity we produce locally, thus relieving the burden on the upstream medium-voltage grid. To do so, the control system of the inverter commu­ni­cates directly with the control boxes installed in the customer systems with signals in the range of 10 MHz over the power grid. This means that, when a lot of elec­tricity is gener­ated, elec­tric vehi­cles are charged, heat pumps are started up, and the battery in the container is charged. If more energy is required later than what is being produced, it is avail­able.” It sounds like a real win-win situ­a­tion for grid oper­a­tors and customers.

The semi­con­ductor tech­nology required for this, however, intro­duces the next chal­lenge: the short-circuit capacity. Schwedler says, “In order to provide suffi­cient short-circuit capacity with semi­con­ductor tech­nology, we designed the power of the system to be twice as large as would actu­ally be needed. We played it safe and wanted to avoid nega­tive effects for our customers during the field test at all costs.” His colleague Schön­feld adds, “This first step was about testing the tech­nology under real-world condi­tions. As a result, economic consid­er­a­tions were not yet a high priority. We can use the find­ings to later dimen­sion the power actu­ally required. These are also needed later to be able to compare the different tech­no­log­ical alter­na­tives with each other.” 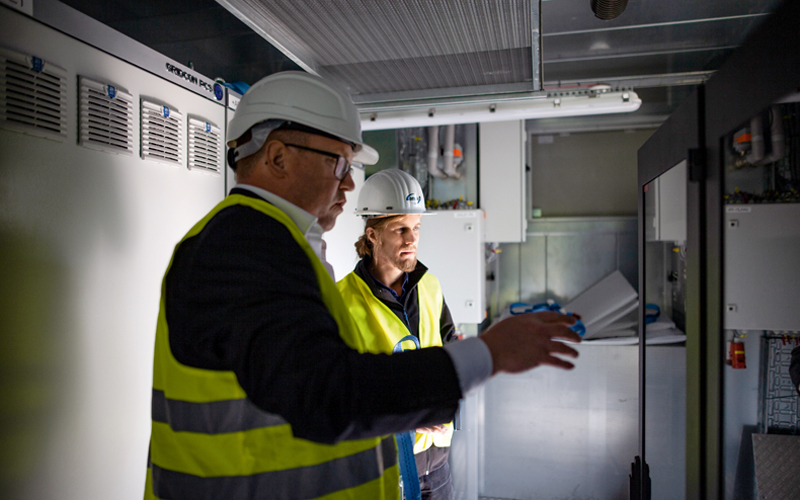 Rein­hausen specialist Wüsten­berg is opti­mistic, saying, “With our control tech­nology, we are also making the grid more intel­li­gent. If we network producers, consumers, and battery storage units within a distri­b­u­tion grid with each other using control tech­nology, this alone produces compelling advan­tages.” Rein­hausen strate­gist Rupp is thinking one step further, saying, “If the grid-forming battery storage units prove their worth in distri­b­u­tion grids, this would make it possible to relieve the burden on higher-level grids, since solar power from the local grid can be stored and consumed in the distri­b­u­tion grid. This also secures higher supply reli­a­bility since the grid-forming inverters can supply the grid exactly like a diesel gener­ator or small power plant.” Currently, it seems that this is so.

Do you have ques­tions about the project?
Dirk Wüsten­berg is avail­able for you:
D.Wuestenberg@reinhausen.com