“It Was Pretty Tough”

Why do you need a mobile transformer?

After hurricane Sandy in 2012, we realized that the longest our customers will accept being out of power is three to five days and after that customers, including you and me, can’t tolerate living life without electricity. So typical transformer downtime at Con Edison, from the time it trips to the time it gets restored is about 14 days. These are three-phase units that require a lot of assembly, processing of oil, wiring etc. and actually also the physical movement of these units.

Having gone through Sandy as one of the operational and planning chiefs during the recovery effort, I realized we have to do better and in addition after 9/11 and looking at current world affairs – the geopolitical scene – there are a lot of threats: physical threats, and also actual actions that have taken place. So you say to yourself: ok, if somebody comes and destroys our transformers, the quickest we can do replacement if we have spares on hand is 14 days – which is three times our customers’ expectations. And resiliency must be not just to terrorism but also to national weather, earthquakes, flooding—all those situations.

What is the technical concept?

I said to the transformer manufacturer: “Here is my concept: I want a transformer that’s dual voltage 345 to 138 or 138 to 69. I want it with a full tap-changer, plus or minus twelve percent. I want 170 percent overload capability which is kind of unique to us and I will make it easy for you. Put the tap changer inside the main tank – which was a ConEd first since it had never been done before – and I want a manual voltage selector between 345 and 138 kV. In addition to that, I want plug-in bushings on the high side and the same on the low side. In addition, I also want flexible HV cables that connect to the low-side, two-part bushing adapter. Most importantly, I want minimum assembly required on site when moved, so I want it be moved oil filled. Furthermore, all of this should not weigh more than 100 tons oil filled and it should fit in the cargo bay of a Lockheed C5A Galaxy or an Antonov AN 124 cargo aircraft. This was a pretty tough challenge as it had never been done before and goes against most traditional transformer design approaches.

How did you approach this task?

We took the best of our traditional transformer and tap-changer designs and said ‘ok we have a design and because the transportation is a big issue with these transformers let’s make it single phase’. By having single phase you can quickly transport it. Also, by having cable connections on the secondary side, you just need one fix point on the high side to line it up to your existing bus and you don’t need to line it up perfectly to do that.

The other thing that I also mentioned is that terrorism and extreme weather events are very rare – we call them high impact, low frequency – so you cannot really justify having a unit sitting there just for those occasions. So I said ‘what I also want is for this to be used on a day-to-day basis so that in the middle of summer, if we have a three-phase unit failure, I can bring this in and connect it quickly.’

“When we say ‘go’, the transformer must be up and carrying load in less than 72 hours.”
Sanjay Bose

When the OEM asked of my expectation for energizing, I said ‘3 to 5 days – but more like 3. And it’ll be used on regular basis, so that people don’t forget how to use it and all the parts have to be containerized – the cables, the plug-and-play type equipment and the relay protection systems, etc.’ And the other thing I said is that because it will be placed on streets or inside substations, we won’t have full environmental containment so I want an environmentally friendly fluid that has a higher ignition temperature, because we won’t have regular fire protection on it. At the end of the two years of R&D the following dialogue came up: ‘You want a tap-changer’; ‘yes’; ‘you know that takes a long time’; ‘yes’; ‘well, we are talking to Reinhausen’.

So then we took it a step further. We took it to my connections working with the government. We actually took it to the US Air Force load masters to come up with a loading plan. I now have a load plan for a C5A Galaxy where this unit will sit in the cargo bay – the conservator and the tank.

My vision is that from the time we say ‘go’ to the time it’s energized and carrying will be less than 72 hours. And I think that would be phenomenal because I don’t know of any other product at 300 MVA that can be placed in service in 72 hours and have all these benefits like a regular transformer with full voltage regulation. People also talk about impedance issues. Going through this design you can actually add some small series reactors to change the impedance. Our auto-transformer impedances are 4 to 7 percent, and by adding a series reactor, it can serve the needs of many utilities at the same time. So that’s truly an equipment sharing program. It could be here, it could be in Germany, it could be anywhere.

Why do you equip all new resiliency units with monitoring systems from Reinhausen?

We want to have a way to ensure that the unit is reliable at all times. The transformer is good but the moving parts are important. You want to make sure that, when you need it in emergency, you have a complete ready-to-use unit. So having the monitoring unit actually helps you diagnose and fix things before they become an emergency.

What is your experience with those monitoring systems?

Reinhausen monitoring systems have been very good but the best part is that, over time, Reinhausen has worked to improve the product. So, it’s not the same product as ten years ago. To an average operator, the display should actually tell you what’s wrong instead of showing codes that engineering has to decipher. The engineering lingo on the displays are clearly stated in operator language for any-one to read and understand – a really friendly interface. Also computer power has grown; software, firmware has grown; platforms have grown as well as experience. 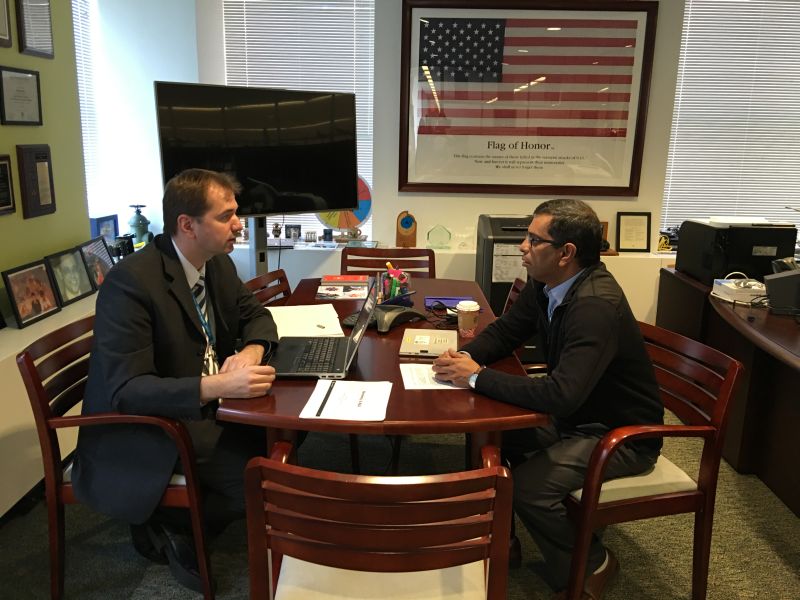 Sanjay Bose (right) in his New York office talks with Markus Stank, MR sales employee, about the almost impossible task of keeping the energy grid up and running for a megacity like New York. (© Con Edison)

Per year on average, it saves us between six to eight possible tap-changer failures. Other than the resiliency units, all our transformers have the tap changer outside the main body. So if a failure occurs, the barrier board breaks and the cables get impacted and often times we end up replacing the transformer. In addition, if the tap changer is faulty the oil in the main body does get affected and one does not have to drain the unit to fix it. So the idea of having an internal tap changer raised a few concerns. However, with the increased reliability of Reinhausen tap changers, the probability of such a failure has been reduced enough for us to take this risk. And I think that’s great because changing a transformer means many millions of dollars as opposed to going and fixing the tap changer.

Regarding technical consultancy: how important is the technical competence of suppliers like Reinhausen?

Reinhausen, unlike quite a few manufacturers, has really technically competent staff. Most of my interactions with some major companies have been more with marketing folks. There is a great distinction between marketing and technical skills. The people we sometimes interface with are marketing people who are not technically strong and this leads to a lot of back and forth to fix designs and real time issues. My experience in going to the Reinhausen factory and meeting people: you see both sides of it. But most importantly, what’s striking is that they are very passionate about their product; they take a lot of pride in their product, which I don’t see often. And so they know their stuff technically and it becomes easier for them to market it. For a customer, that is the best of both worlds and is very satisfying to experience.

Thinking into the future: Which technical requirements will become important for power transformers in megacities like New York?

With the advent of renewables and integrating them into our system, there are a lot of issues with harmonics being generated and then stepping them up and bringing them into the transmission side. Voltage regulation is one, checking harmonics is the other. What I envision 5 years, 10 years from now is that our thinking needs to change. We need smaller, cheaper, lighter units like the resiliency transformers. So they only last 20 years, but if they are easier to replace, I’d rather do smaller investments over time than one large investment today which has to be repeated. So I change the transformer every 20 or 30 years.

I think that’s much better than having a very expensive unit sitting around when I don’t know what my future looks like, because I could end up with a lot of stranded costs. I have to be smart enough to know how I can maximize my investment so that I can make sound business decisions without sacrificing reliability. Any business including yours would do that. In other words, if you need a reliable car for work, why go buy a top brand twice as expensive as another when you can replace the less expensive car more often and still have a reliable means of transport. That’s the business model we need to aspire to.

Lorem is ipsum – not a dolores

The mobile resilience transformer is a real multitalent: It can be easily transported, quickly put into operation and covers a wide voltage range.