“As Simple as a Light­ning Arrester”

Harmonics damage elec­trical devices, but most filter solu­tions are too complex for users to under­stand. Holger Kret­zschmar from Rein­hausen Power Quality has the answer: the Total Harmonic Solu­tion modular system.

Total Harmonic Solution—it certainly sounds like a system that can solve any problem. What does it involve exactly?

That’s precisely what we want to achieve with the Total Harmonic Solu­tion. It is a modular system comprising passive and active filter solu­tions which can be used
to elim­i­nate all kinds of unwanted harmonics in low-voltage and medium-voltage networks. Including those that are set to increase in the future.

Why was this devel­op­ment neces­sary? What can we expect to see in the future?

Networks have changed. Back when the world was simple, all we had to do to keep the voltage stable was compen­sate for reac­tive power. Things started to change in the 2000s: More and more frequency-controlled drives are now used in machines. These are very energy-effi­cient, but the power elec­tronics have a nega­tive impact on the network which can cripple entire produc­tion lines.

„Small power elec­tronics break quickly when subjected to higher vibra­tions, which can be expen­sive when a whole hall is lit with LED lamps.“

To begin with, it was mainly the fifth harmonic that caused problems—which could initially be recti­fied with passive filters. But as the number of frequency-controlled drives grew, addi­tional harmonics emerged: We now had to deal with the seventh, eleventh, right up to the 51st harmonic. This is done with active filters. And now we have a situ­a­tion where supra­har­monics — vibra­tions in higher frequency ranges of two to nine kilo­hertz — are causing prob­lems.

One Solu­tion For Everyone

Clean voltage is crucial to ensuring reli­able oper­a­tion in numerous appli­ca­tions. Unwanted grid feed­back effects can disrupt oper­a­tion, resulting in addi­tional costs and even total failure. With the Total Harmonic Solu­tion modular system, this kind of disrup­tion can be prevented without any need for compli­cated plan­ning work. The four exam­ples below demon­strate how the Power Quality filter solu­tion can be used to ensure stable voltage. 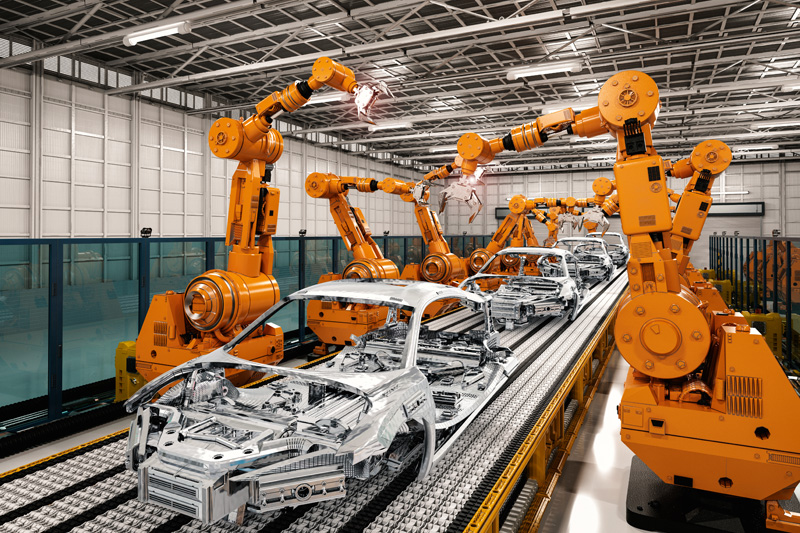 The auto­mo­tive industry is a classic field of appli­ca­tion for filter solu­tions. In this sector, power elec­tronics enable reli­able, highly auto­mated produc­tion on a massive scale. This goes hand in hand with a consid­er­able risk of disrup­tion — but, fortu­nately, this risk can be easily mini­mized with the right filter solu­tions. 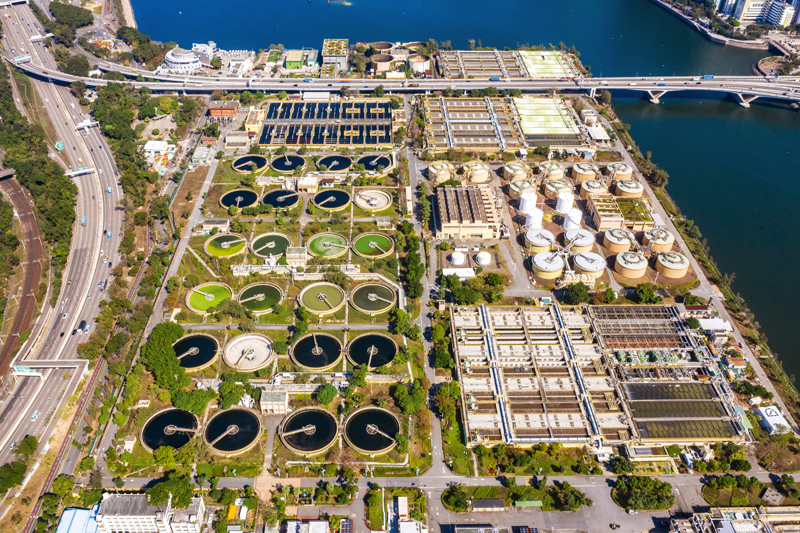 The water industry is keen to maxi­mize its energy effi­ciency. To this end, power gener­a­tion plants (such as solar power plants) are increas­ingly being inte­grated into modern treat­ment facil­i­ties, complete with frequency converters, in order to operate elec­trical pumps — which are them­selves increas­ingly being equipped with frequency converters as well. Disrup­tive harmonics are there­fore inevitable. 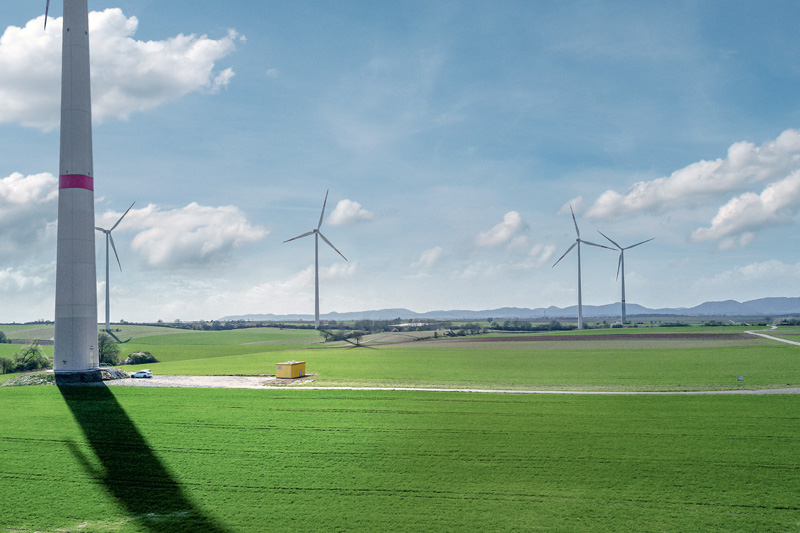 When elec­tricity is being gener­ated from wind power, harmonic currents often occur, disrupting the power quality within the grid. If plants frequently exceed the prescribed limit values in this regard, they have to be removed from the grid. In the worst cases, they may even lose their oper­ating licence. 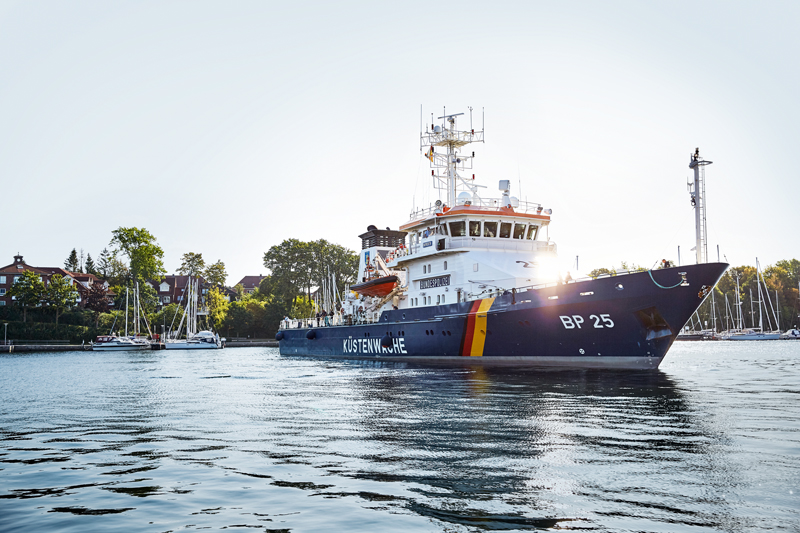 Ships are fitted with complex elec­tronics. Frequency-controlled drives for compres­sors, bow and stern thrusters, main drives with several megawatts of power, as well as power inverters for shore power supply are just some of the tech­nical inno­va­tions being put to use in the ship­ping sector. As a result, the on-board power supply can quickly become over­loaded by harmonics.

This is due to the use of active front ends (AFEs)—a type of frequency converter—which are set to become much more wide­spread in the future. In the past, supra­har­monics didn’t cause anyone any prob lems—a punching machine is robust enough to with­stand them—but modern loads are becoming more and more sensi­tive, as shown by the example of LED lights. Small power elec­tronics break quickly when subjected to higher vibra­tions, which can be expen­sive when a whole hall is lit with LED lamps. We there­fore real­ized that we needed to find a way to solve these prob­lems once and for all.

What was your solu­tion?

The system is very much based on tried-and-tested tech­nology. The GRIDCON® CHF passive filter elim­i­nates the fifth harmonic. For some appli­ca­tions, this module will be enough. More exten­sive protec­tion is offered by the GRIDCON® ACF active filter, which covers the range up to the 51st harmonic. And for supra­har­monics, there is our newly devel­oped SHU filter module. Thanks to the modular struc­ture, customers can select precisely what they need, and retro­fits are also possible.

“Thanks to the Total Harmonic Solu­tion, prob­lems with harmonics will be a thing of the past.”

But what makes the Total Harmonic Solu­tion really special is the device soft­ware that we have spent years honing and opti­mizing. The soft­ware measures the harmonics and the algo­rithm contin­u­ously analyzes the inter­fer­ence level and auto­mat­i­cally coun­ter­acts it to ensure that the defined limit values are not exceeded. When it came to the program­ming, we made sure that we incor­po­rated all of the expe­ri­ence our service tech­ni­cians have had in the field. We can’t simply do things “by the book” if we want to reflect reality.
.

That’s true. There are numerous indi­vidual solu­tions in use in the field which are highly complex and over­sized. Para­me­ter­i­za­tion can also be extremely labo­rious during commis­sioning or in the event of network modi­fi­ca­tions. With our stan­dard­ized approach, it’s a different story. We wanted a solu­tion that—to put it bluntly—was as simple, reli­able, and durable as a light­ning arrester and which could be installed based on the plug-and-play prin­ciple, wher­ever it is needed or wher­ever there is enough space.

Depending on the situ­a­tion, some­times all that is required is a compact wall device. With our modular system, that can be easily arranged. Current trans­formers are not required and parallel oper­a­tion with other filters is also possible—it doesn’t get more flex­ible than that. The system regu­lates itself auto­mat­i­cally and filters exactly what needs to be filtered. And if a company modi­fies its produc­tion line and the network changes as a result, that’s no problem either—the new para­me­ter­i­za­tion takes care of itself with no need for a visit from a service tech­ni­cian.

What appli­ca­tions is the solu­tion suit­able for?

It is aimed at anyone who has prob­lems with harmonics. This applies to virtu­ally all highly auto­mated produc­tion facil­i­ties, such as those in the auto­mo­tive industry. But our filter solu­tions are also in demand at sewage works, at wind and solar farms, and even for on-board power supplies on ships. 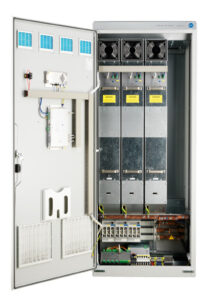 The soft­ware is programmed such that the control system adapts auto­mat­i­cally and with high preci­sion to the respec­tive network and its specific vibra­tion behavior. Instal­la­tion is incred­ibly easy and makes use of the plug-and-play prin­ciple — there is no compli­cated para­me­ter­i­za­tion involved.

If you have any ques­tions about the Total Harmonic Solu­tion,
Holger Kret­zschmar will be happy to advise you:
H.Kretzschmar@reinhausen.com